I recently commented on a wall post by an individual who was speaking out about his concern and discontent in how the office of Prophet is viewed by the modern day Church. And while I am very slow to recognize that calling in someone based on just their word for it that they have been called to be a prophet and have that gift, I do fully recognize that the gift of prophecy is active and significant in today’s Church. Here in lies the rub, for me at least as it concerns this particular post I read.

Unfortunately for my new friend, there is a lack of understanding in the Church as a whole about the gift of prophecy. His frustration was obvious, no doubt the result of a faceoff with a Pastor of a Church that did not see eye to eye with him on either his gift or what he had prophesied. Either way, his making it public on FaceBook seemed abit out of character for a man (or woman) that would be called to the office of Prophet.

The Scripture that came to mind was Proverbs 6:16-19. “There are six things the LORD HATES, seven that are DETESTABLE to him: haughty eyes, a lying tongue, hands that shed innocent blood, a heart that devises wicked schemes, feet that are quick to rush into evil, a false witness who pours out lies and a man who stirs up dissension among brothers.” I am not one to bark (outloud at least) about what I see happening when I see things that I KNOW the Lord hates, but for all practical purposes, this well-meaning brother was becoming a “man who stirs up dissension among brothers.” It’s just not something you do on FaceBook in front of almost 600 million users.

OK, so back on point, like each of the Ephesians 4:11 ministry gifts, each gift (offices within the Church in the view of many scholars) carries with it a warning of its misuse or use in error. A harsher judgment by G-d Himself to be one for certain. But, of the office of prophet, I don’t think there is another gift that demands stoning to death should the prophet prophecy inaccurately.

Yes, believe it or not, this was the practice of Old Testament days. Stone false prophets to death (those who prophesied inaccurately); and even in many cases, it was more of, “just stone them anyway, because we don’t like what he is saying.” To be judged harshly for the misuse or failing in the other Ephesians 4:11 ministry gifts seems a far cry less painful than stoning.

Here is my take on the gift of prophecy. The GIFT of prophecy is far more recognized in the New Testament Church, than the OFFICE of the Prophet, since it was not directly mentioned as a governing office within the New Testament Church in any writings found in the New Testament or in any supporting documents of that day. Sadly too, it is one of those gifts that is seldom appreciated like that of Apostle, Pastor, Teacher, and Evangelist, or even many of the minor gifts as in those as found in the ministry of helps. And in some main stream denomination, you would most likely be totally ostracized from that denomination for operating in that gift in any way. It’s just way to ‘spooky’ for most “cozy comfy sunday go to meeting” Christians.

The Bible clearly teaches that we are ALL encouraged to operate in all gifts, including prophecy; however, the office of Prophet in the new Testament Church is not widely recognized, and considered by the masses as it was in the day of the Prophets, an obscure and little appreciated position (for the most part). I mean, they were very active in Old Testament day, and are responsible for many leadings, corrections, and directions brought by G-d Himself, but speaking of how humans at large have historically acted towards prophets, they are were not and are not fully – if at all – appreciated in the Church… and especially by Apostles or Pastors.

As a “position” in the Body of Christ, it is seldom incorporated into Church government due to the obscure nature of it in light of G-d’s Logos Word. It is recognized at times within the context of the spoken Word of G-d from the pulpit under unction of Holy Spirit by the Pastor and Teacher, but not as circumvention to that which is taught from the pulpit.

Like in the days of our forefathers of the faith, the prophet of today is not taken seriously because of their abuse of the calling when they attempt to direct the affairs of the Church through a soulish incarnation of Holy Spirit speaking, rather than under the unction of Holy Spirit who gives the Word through the prophet. In a real sense, such abuse is not foreign to the other Ephesians 4:11 ministry gifts.

I have seen gross abuse by those operating in every position of the five fold ministry gifts aside from the gift of Prophet. Of course such a calling (gift) comes under even more scrutiny in light of the edict that if a prophet speaks a false prophecy that they should be stoned to death as a false prophet.

As throughout the history of the Prophet, one can expect to be unpopular, unappreciated, unrecognized, and unlistened to, and quite possibly – howbeit not stoned to death if they miss a prophecy – put out of the Church if they do as being a false prophet. I think this is why so many of the true men and women of G-d that I know who operate mightily in the gift of prophecy tend to have few friends, spend most of their time in prayer, and have only a select number of ministerial associations (aside from the ‘fans’ who think its a cool gift to have and wish they had it). 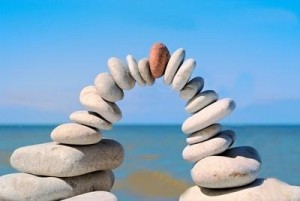 I know of a church where they have a great deal of prophetic activity going on and the office of Prophet is taken very seriously. In fact, in their foyer leading into the sanctuary, there is literally a dump truck of river rocks dumped into a large container in easy reach of all paritioners. The sign reads, “Let he who rises to the call and office prophet, prophesy well, lest he know the full measure of falsely doing so.”

I prophesy often, and accurately, but being one who has been hit by a few rocks in my day, I do NOT want to EVER be called to the office of the Prophet!!! I am not that brave. I will stick to pastoring, teaching and evangelizing!!! :-)

What do you think? Weigh in on this subject.

One thought on “What of the Prophet?”