Merriam Webster defines persistence as, “the action or fact of persisting; perseverance; to be persistent, i.e. continuing to exist despite interference or treatment.”

Recently I went to see my son on Sunday at the Church where he has been actively involved in ministry for the last few years while finishing his college degree. He was leading praise and worship for the Sunday services (3 services back-to-back). As often as I see him up on stage doing what he does, I am always amazed. On this particular Sunday he had been dealing with a sore throat only a few days earlier. He was not entirely feeling his total outgoing self. I guess I should have been concerned as a parent, but I wasn’t. He is a big boy now, and knows enough to take care of his voice.

As I was standing there as a part of the congregation listening, singing, and being blessed by the music, I wondered a bit. There he is, doing what he loves to do, and doing it so well. WOW! How did he get so good at it, so fast? I had one of those ‘parent’ moments when a parent sort of gets choked up and filled with gratitude for one of their children (it happens a lot with me and my boys). I really did marvel at it all as I was taking it in at that moment.

I wondered for a brief moment, “was it just his natural talent or maybe a gift that was given him?” Quickly I came to my senses, remembering what he sounded like the first time he attempted to sing a song when he was just starting out playing guitar and singing. It was definitely NOT a gift! (Son, if you are reading this, don’t take it too hard. You are amazing now.) Was it that he is just so naturally talented that anything he put his hands to would turn to gold or success or blessing? No, it was not a natural talent. I remembered Joshua really having to work hard to be good at anything he attempted to do, and his frustration growing up when he was not as good as he thought he should be.

After contemplating it for a while, it really just sort of smacked me in the face. Although some of what I was witnessing in my son’s life might have had something to do with being G-d given (at least the desire to do it), the overwhelming reality was that it was his almost daily consistent hard work in practicing, and his perseverance that contributed the most to his success as an up and coming Christian musician. Something else dawned on me as I stood there – my son’s focus. Joshua had determined when he was just barely 16 to take me up on my word and self-authored proverb of, “Investing twenty minutes a day for one year on any skill that you want to perfect will ultimately place you in the top 1% of the world population that is able to do it, and who are best at it.”

I really don’t know how ‘divine’ of a concept or thought this ‘dad proverb’ has been, but for Joshua, his daily persistent small steps in developing his skill at playing guitar and singing allowed him to be on stage with a number of other talented musicians, and leading worship in front of a thousand people. How cool is that! 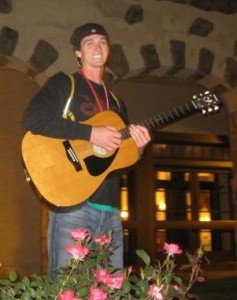 Joshua, before a concert! Blessed!

For Joshua, he was like any other young person growing up. He had all sorts of ideas of what he wanted to do, and over the years it has been a long list – soccer, running, martial arts, surfing, girls, music, guitar, singing, law school, seminary, working with youth, and of course, did I say surfing? He loves surfing. The nature of my son Joshua is that those things that he chose to put his hands to were and are destined to be achieved, conquered, possessed, completed, or given of his total heart towards. Music and leading worship was one of those. And, there he was after 6 years of consistent effort, playing guitar, singing, and sounding like an up and coming music talent that would one day fill coliseums and stadiums. He looked totally in his element. I was in awe of what G-d was doing through him to touch the lives of so many there that morning, but most of all, I was amazed at what Joshua had done in preparation for such a time as this, and the persistence it required for him to get there.

MY POINT in all of this is simply this. IF you are to be successful at anything, or even come close to perfecting something of significance in your life, you MUST be willing to count the cost of your task, and then focus with a persistent vitality in seeing it through to completion. This is critical to your overall success in life. Yet, sadly, for most, having the willingness to persist seems too difficult.

Unfortunately for many, there is a lack of a willful act to follow through with what they have started and to remain steadfast in their conviction to be successful at it. This is true in developing skill sets, accomplishing goals, and completing personal or work assignments, as it is in that of going the distance in a relationship when the relationship seems to be all but falling a part.

This lack of commitment to follow through is why so few people ever really achieve anything great or significant in their lives. It especially holds true in the area of financial success, and that of achieving one’s dreams they have for themselves or their family. They simply choose to give up or quit before they really get started. They choose to listen to those ‘voices’ of pessimism, condemnation, shame, inferiority or insecurity in their heads. That is not how we are created to be. We were made to be alive, productive, pro-active, creative, and successful in our lives, and in accomplishing worthwhile goals and pursuits that we were meant to possess.

The same can be said about your involvement in business, and especially in that of developing an online marketing career. Like anything worthwhile, it takes your willingness to see the big picture of what you can accomplish if you put your mind to it, it requires a plan, and FOCUSED intent that will allow you to be persistent in the small day to day steps towards success that are necessary if you are to be successful and reach your bigger personal, business, and financial goals.

It is so very easy to get shipwrecked in our dreams, and forget why we are doing what we are doing. There will always be tons of temptations to get you side tracked, off course, and completely distracted IF you do not resist them. Take these five important steps in changing your future:

1) Determine what you are most passionate about, and what you want most out of life, and then write it down, whether it takes a sentence, a paragraph, a page, or a book!

2) Make a list of goals that you will use to keep you on track, and that will be your benchmarks (road signs along the road towards your success to let you know you are on course), and commit to investing at least 20 minutes each day in a concerted, intently focused way to learn everything you can about what you are wanting to do in achieving your ultimate goal and how to best accomplish it.

4) Surround yourself with wise advisers that you can call on for insight, help, or assistance.

5) Determine once and for all that you will set your hands to the plow for your future success and not turn back from the task in what you know you have been called to do, and build into your daily life, the power of persistence that says, I will continue to do the things that may be difficult for me, or that I may not enjoy doing right now, in return for the great good of my ultimate success in what I want to do or that I have been called to do.